I would think that most people who know me would think of me as a confident person. For the most part, I feel that I am. However, when it came to my photography, I always had doubts that it was good enough.

This self-critique in itself is obviously a good thing. We analyse our work and then decide if we have finished it or whether it is good enough to print or to show online. My friends would probably also say I am a bit of a perfectionist in that anything I do has to be of good quality.

When I took up photography seriously again about ten years ago after a break of a few years I initially thought I was producing good pictures. Then I started to look at what other photographers were producing and realised that I had a lot of work to do to get anywhere approaching their skills.

So, I practised. I photographed and processed incessantly. I photographed everything that caught my eye. I re-learnt composition and tones and I learnt to use Lightroom and spent hours in Photoshop practising techniques and then abandoning them because they didn’t fit my vision for my work. But eventually, I arrived at a way of processing my photographs that pleased me and gave me the confidence to think that I was giving my images the best chance of being anywhere near average.

But even when people said I was doing good work I had this inner self-doubt that my photographs were still not good enough. I posted on Flickr sure, but the mutual back-patting didn’t sit well with me, so I stopped uploading.

I had a boost to my confidence when I exhibited in a local gallery and my prints sold well but I still needed to know that what I was producing was of a worthwhile quality and visually strong. So, I joined the Royal Photographic Society with a view to trying to obtain their distinctions. These distinctions are not easy to get, but I felt that if I could even just get the lowest one, the Licentiate award, then that would be enough.

After submitting a ten image panel I was awarded the Licentiate and of course, I was overjoyed but then as is human nature I wanted more. So, I applied for the Associateship of the society with a panel of fifteen images which to my joy I also got.

It was this award that finally made me realise that I actually could take good photographs and also meant that personally I now felt that I could hold my head high amongst other photographers. It has done wonders for my confidence and has also meant that now I feel free to experiment with my photography.

Since I obtained the Associateship, I have had a five-page picture spread in Black + White Photography magazine and obtained highly commended in the Fujiholics black and white photographer of the year. 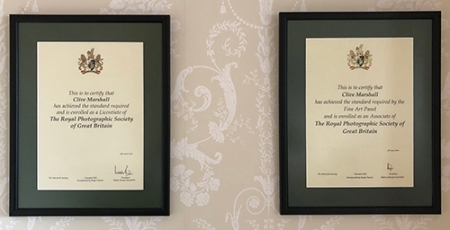 These two certificates have given such a boost to my confidence in my photography that I now have new enthusiasm and interest in taking photographs which I find both exciting, challenging and satisfying.

2 thoughts on “A matter of confidence?”