These three images were taken at Stowe gardens like those in 2015 Photographs #4. Once again they were taken with the Nikon D800 and the 24-120 f/4.0 lens. I do like taking statues, as they are not usually prone to moving and with some creative positioning, exposure techniques and post processing a decent image can sometimes be found. There is a lot to be said for the sometimes held opinion that photographing artwork, which I would say includes statues and sculpture, is akin to artistic plagiarism. I think this argument, however, cannot really be attributed to images of statues, in the same way that it cannot be labelled on architectural photography. The photographer has to position him/herself at the right angle to the building or statue in order to achieve their vision for the object. Lighting, background, colour and mood have to be considered in order to give the viewer an impression of what the statue or building meant to the photographer and his vision.

The first image is of a new statue at Stowe. I liked the way that it stood out from the trees and how the remnants of the cover which lay across the plinth gave a feeling of reality and dissonance to the sculpture. I darkened the background around the statue in post-processing to make it look as if the light was falling in the centre of the glade. 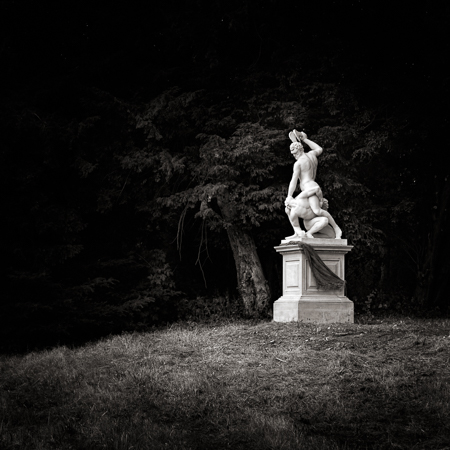 The second is an embellishment on the side of a folly at Stowe. It is fairly innocuous, one of several placed around the structure, but getting in low and giving the image a dramatic angle has helped the composition, giving a rather ordinary carved face an ominous form. In post processing, I enhanced the sky to make it more brooding and atmospheric.

The third image is more of an abstract image using the pillars on one of the temple follies to give vertical strength to an otherwise horizontally biased image with the edges of the building, shadows, grass and path. I ensured that three pillars were visible in the image so that it became balanced and didn’t force the eye in an uncomfortable journey around the frame. Showing two pillars, for instance, would have resulted in tension between them and the edges of the frame, making the viewer’s eyes dart back and forth.