Most of the images that I take, and have taken, over the years are monochrome. That’s not to say I don’t like colour images, I do, very much, it’s just that l like to produce black and white photographs. I find it easy to visualise the monochromatic values of a scene when I look at it. I can see the tones, the textures and the shapes of the scene that will make a monochrome image. It is the inclusion of these three that will enable it to become a successful black and white photograph that people may want to look at.  But once that image is produced and presented to a viewer then how successful the picture is for them as an individual is down to how they react and associate with it and how the photograph speaks to them.

The image below is an example of that. As I was taking the picture, I saw the different “layers’ of light and tone. The top band of dark leaves in the trees at the top, then the line of brightness behind the trees, followed by the tree shadows and at the bottom of the frame a lighter line of grass. To me, the tree trunks themselves became a link between all of the areas of tone and texture which enabled me to move into the light area behind them.

It was also the small details that grabbed my eye; the small plant underneath the tree trunk acting as a lead into the movement of the image; the sweep of the very light area of grass with a slanted movement to the right emphasising the viewer’s journey through the image. And finally, I liked the implied peace and quiet of the scene, making me want to explore its depth, hence its title.

That is just my thoughts on this one photograph, but what is so great about art and photography, is that we all have different feelings and different views about pictures and this is how it should be. 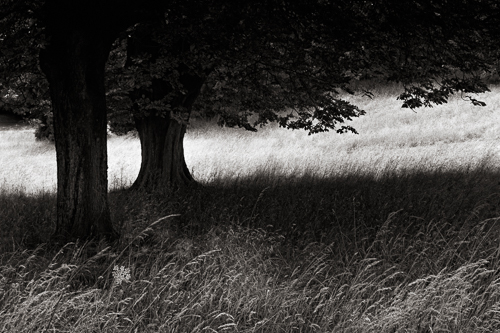