Not long after I bought my Fujifilm X-E2, I decided that due to a pair of large hands, I would feel more comfortable if I fixed a grip to it. Although the premise of buying this camera was to take advantage of its smaller size compared to my Nikon’s, comfort is everything and I just felt my grip on the camera would be more stable with a grip.

So I originally looked at the Fuji made grip itself. There’s no denying it looks well-made and sturdy, but I was put off however by the price which was anywhere between £65 to £90 – and more importantly – the fact that to change the battery (something you do a lot with the X-E2) you had to remove the grip.

So I started to look around and found this on Amazon made by Andoer. It cost me an amazing £16 and I thought at that price I had nothing to lose. As it turns out the grip is excellent. It’s made of aviation 6061 aluminium and so is very light, but extremely strong. Investigation showed its main component is magnesium. It is painted black all over with what looks like a very durable finish. There is no leatherette on the grip however. The grip comes in three parts: the base, an Arca compatible plate and the grip itself. All of these are fixed to the chassis with bolts and a supplied Allen key. The base of the plate is cut away so that access can easily be made to the battery compartment without removing the grip. There is also a ¼ inch threaded tripod hole in its base. 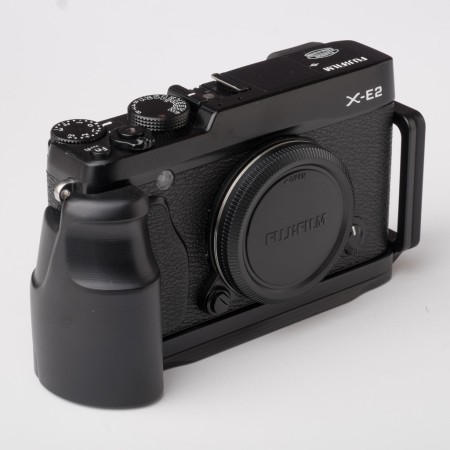 It fitted perfectly on the camera and is very secure with no movement at all. I left the Arca plate off and just used the grip. It adds to the width and overall height of the camera but not excessively – it’s still smaller than my D7100 and D800.

In use it really helped to get a good, steady hold on the camera but for one thing – the grip is quite smooth and has no friction with the fingers.

I therefore decided to try and fix leatherette to the grip in order to facilitate better cohesion. I purchased a 9” x 12” sheet of black Seal Grain leatherette, with adhesive backing from a company called cameraleather.com in the USA. The total cost including shipping was about £15.00 and I received it within 10 days.

The application of the leatherette to the grip was straightforward. I put it around the handgrip itself, and a couple of smaller pieces on the back just for aesthetic purposes so that it would blend in more with the covering on the camera itself.

I’m really pleased with the way it has turned out, and the grip works really well now, and I think looks a lot better. 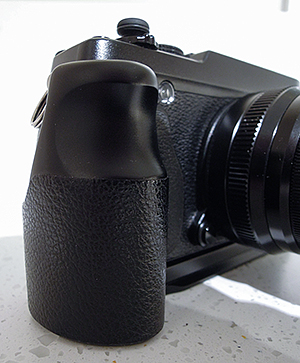 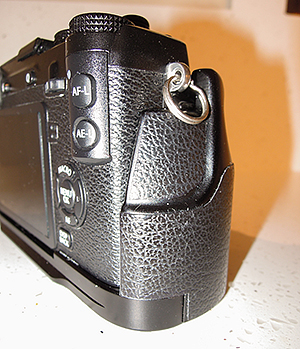 The image below also shows the camera with the black Match Technical Bug Small Convex Soft Release attached. This makes a heck of a difference when you’re trying to take a photo at a really show shutter speed. 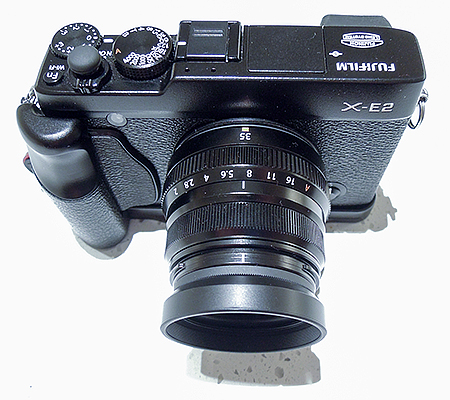