This is the second part of the series of photographs I took at Twycross Zoo in Leicestershire.

Once again the lens coped unbelievably well considering I was shooting through dirty plate glass at times into the enclosures. This was certainly the case with the primate images this week.

This first image is one of my favourites. It shows the dominant male silverback gorilla in the Twycross troop. He is watching a young gorilla teasing a very old silverback who was sitting quietly eating. The youngster would run up and tap the old gorilla and then run away. The dominant male watched for a few minutes then got up, grabbed the youngster by the arm, pulled him over to a few females sitting at the other side of the enclosure and plonked him down with them, leaving the old fellow to continue with his lunch in peace.

This photograph is of a chimpanzee who seemed to be day-dreaming as he was eating. I focussed on the eyes through the glass plate, hoping that I may get them in focus and I think the result is pretty good.

This final ape image is of the immense back of one of the two male chimpanzees at Twycross Zoo who unfortunately suffered from alopecia. The two, father and son Jambo and Mongo were both hairless and this meant that the powerful muscles of these apes could be seen. Their affliction apparently didn’t affect their standing in the troop, as Jambo was the dominant male. Unfortunately, one month after this photograph was taken, Mongo passed away from an infection. I’m not sure which ape this is, I have a feeling this image is actually of  Jambo. 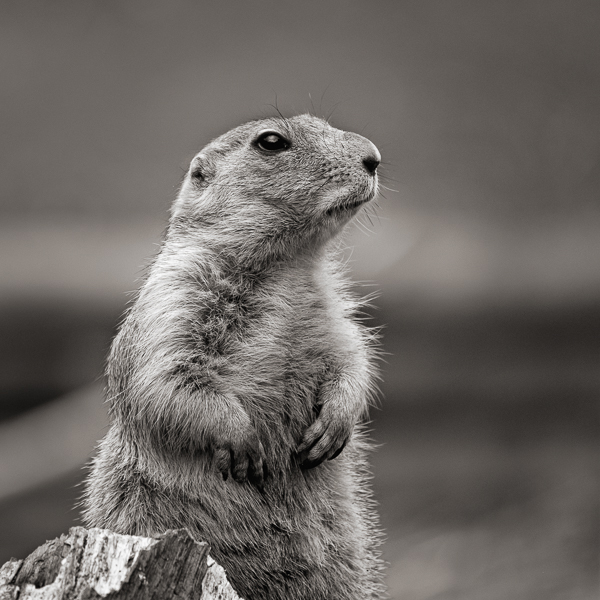 The final picture is of a prairie dog in the typical guard pose they adopt when above ground. The title comes from the BBC series Funny Talking Animals.

The Fujifilm 55-200mm lens has really impressed me. In my opinion, it surpasses its price mark with its quality.