There are some more images taken at Batsford Arboretum in Gloucestershire this week. This time, however, I am showing four monochrome photographs.
Although there are some beautiful colours to be found at arboretums all year round there are also marvellous tones, textures and shapes that can be emphasised with careful post-processing.

The first photograph is of a tree I have photographed many times before, but have never captured it to my satisfaction. The limbs and branches of the tree are beautiful and seem as though they could move and sway around of their own volition. At the time of this photograph, the light was in the right direction and was quite soft. This allowed the detail and texture to be shown on the bark and to also make the branches stand out against the background.

This next image is obviously of Buddha and it sits in the oriental part of the arboretum. In colour, the picture would show the lovely patina that it now has formed on the statue, in monochrome the beautiful tones can be enhanced as well as the nice curved lines of the Buddha. 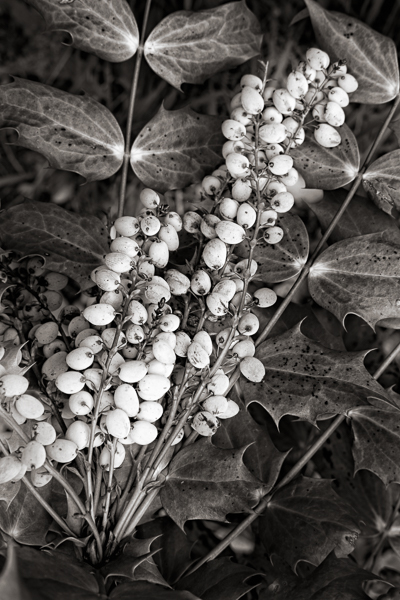 Although most people seem to think that holly berries are red, there are in fact species of holly that have different colour fruits. This particular one had very pale yellow berries that stood out against the leaves of the plant really nicely. I used a monopod for this shot as the light was quite low and the holly bush in shade.

The last photograph is of a bamboo plant. The actual plant is only about two metres wide but by cropping in close it now looks as though the foliage is more extensive than it actually is forming a dense undergrowth.