All of these images were taken whilst I was on a walk one afternoon. I was on a public footpath and had just climbed over a stile when I was confronted with a crop field that had been harvested. The machine had left about six inches of plant sticking out of the ground and in the distance, I saw a lone tree to which the rows of stalks converged. I took several photographs changing my position and camera settings as I did so, but this was the image I was happy with. 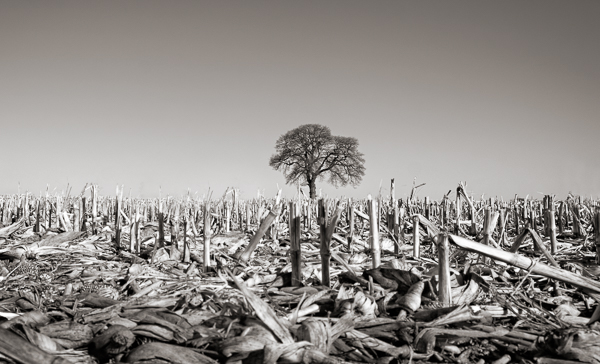 I spent quite a lot of time in the field, and in fact, I went back a year later to get some more photographs. The other two images here were also taken on that first trip. The first of the two has been given a faux infra-red styling in photoshop. Infrared black and white is one of my favourite styles of photography and I hope to get one of my mirrorless cameras converted eventually to shoot it properly. 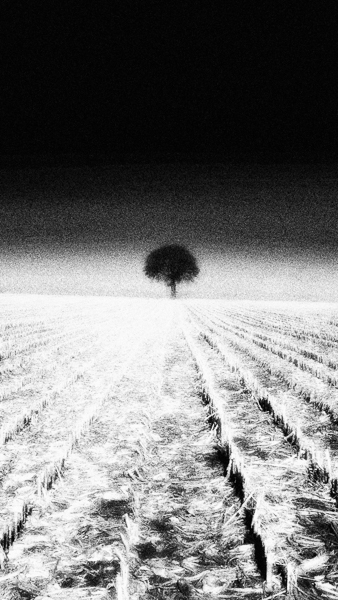 The second image was taken later in the afternoon as the winter shadows began to lengthen. As I was moving around to find another shot, I noticed my shadow and thought it had a nice juxtaposition with the light and texture on the field.

I’m sometimes asked how I arrive at some of the surreal titles I give some of my photographs. The honest answer is I don’t know. It’s very rare for me to have a title in my head as I am shooting the image, I normally arrive at a title when I have processed or finished processing the shot later. Then as I look at the finished picture I usually go with the first thing that comes into my head. I like to think that it is the creative sub-conscious in me that fires out the titles, but one thing is sure, in that the more titles you give your creations, the easier it becomes to name them.