It has been about a year since the last time I went to Birmingham and one ov the viewfinder.club chose the city for his photomeet.

It’s nice to know that with all the (good) changes that have gone in New Street Station, the actual train service itself is still pretty poor. Catching the train from Tile Hill at 10:20 in the morning saw three of us making our way through the half empty first class carriages to the full cattle trucks. Now, there was no one standing at this point, but the only seats available to us because some lycra-clad super-hero had put his bike against some other seats, were those directly in front of the toilets. On the trip into Birmingham two people used them and we just hoped that they hadn’t had a curry the night before, as the doors took 30 odd seconds to close after the occupant had left.

Once into Birmingham we had to negotiate the on-going building work around the station and Paradise Circus until we came to the library. I had seen this being built two or three years ago, but this was my first view of it since its completion. I have to say, I still don’t like the outside. It does look impressive at the moment and I know I’m probably in the minority, but I think in twenty years time its going to look very dated. I would also think that it is probably high maintenance and with Birmingham Council already having cut-back on its library services, I can see it not being supported in the way it needs to be.

We walked along the canal for a short while before the freezing wind drove us indoors for a coffee. This we did in the library and I must say I felt a little bit under-whelmed. At least three of the escalators were out of order, and looking around the floors I wondered what all the initial enthusiasm and fuss was about when it opened. The view from the balcony however was pretty good and afforded a good view of the city centre. 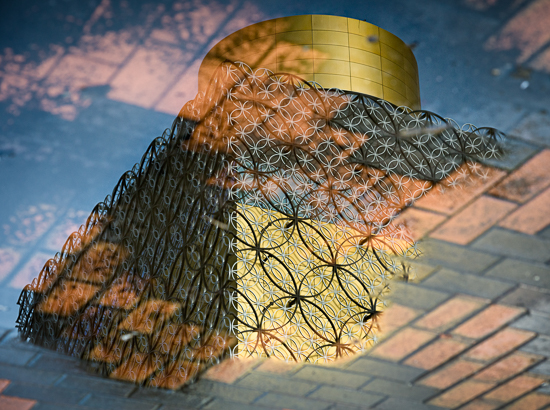