I purchased my Fujifilm X-E3 in March of 2018. It was to replace the X-E2 which I sold. The reason for replacing the small X-E2 with the equally small 3 was to reduce the amount of camera equipment that I carried whilst on holiday with Mrs M. The X-E3 came with the Fujinon 23mm F/2 (35mm full-frame equivalent)lens which was also a bonus. I already had the 35mm F/2 (50mm FFE) and it is an excellent lens.

At the time of buying the X-E3, I was also contemplating the X100F with its fixed 23mm lens. I went for the X-E3 however due to the fact that it was an effective backup camera for my X-Pro2 and obviously can use all of my Fuji lenses.

I took the X-E3 away with me to Italy this year and used it with the 18-55mm zoom most of the time. A very good combination. However, the zoom I think is just on the limit for size when used on the diminutive X-E3. Both together the combination is on the verge of looking like a lens with a small camera stuck on the end.

Once again I began hankering over the excellent X100F but after a while realised that with the lenses I have and the X-E3 being a few millimetres smaller than the X100 anyway to invest in another camera would be nice, but excessive.

So, although the 23mm and the 35mm F/2 prime lenses are small, I was really looking for a way in making the whole of the X-E3 and lens combination smaller.

The smallest lenses in the Fuji system are the 27mm pancake (41mm FFE) and the 18mm f/2 (27mm FFE). The latter was one of the first group of lenses that Fujifilm bought out for their X range of cameras. It was actually bought out with the X-pro1 as a package. The 27mm pancake I did own once and it was a very good lens. However, because of its small size there is not enough room to have an aperture ring around the barrel. As I use this all the time on my other lenses I found it rather annoying when I started to try to adjust the aperture by twisting a non-existent ring, so in the end, I sold it.

So, I have now taken the plunge and bought a second-hand version from Wex. The lens is in excellent condition and came in its original box and all its original contents including oblong lens hood and cap as well as a normal Fuji pinch cap.

Above you can see the size difference between the 23mm and 18mm. The 23mm is on the left, the 18mm on the right. With it mounted on the X-E3 it became part of a small compact camera setup ideal for holidays when carrying all my normal gear is not an option. 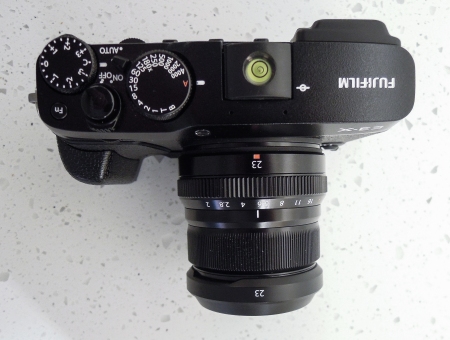 The picture above compares the size of the 18mm (above) and 23mm (below)mounted on the X-E3.

As soon as I have time to get out with the lens to test it properly, I will post some images.