Mrs M, Miss M and I decided to have a walk around Packwood House estate this afternoon. One of my reasons for wanting to get out and about was to try out an old Vivitar Series 1 zoom lens on my D7100.  The lens is in mint condition and is a version 3, 70 – 210 f/2.8. It is supposed to be the best of the 5 versions that Vivitar bought out in the 1980’s.

It is the Nikon AI-S version, which means that it can be used on most of the modern Nikon DSLR’s as the aperture can be set on the throat of the lens and the camera will use it. It is obviously manual focus, but the camera does give focus confirmation in the bottom left of the viewfinder via the left and right arrows and circle indicators. It also has a 1:2.5x macro by setting the zoom to 70mm and reducing the distance set on the barrel until an internal cam is activated.

The big question for me, was whether the quality is there, so I did a couple of tests in the garden, and it seemed ok, pretty sharp and good contrast. There was some chromatic aberration when focussed on an abject against the sky, but this was easily countered in Lightroom. I wanted to take it out and give it a proper run, so this afternoon was an excellent opportunity to do so.

I thought it would be difficult to get used to manual focussing again, but after a few shots there was no problem. I also found that I used the viewfinder focus indicators less as I took more shots, because the ground glass screen of the D7100 enabled very good focussing purely with the eye. It was just like the old days of 35mm SLR’s.

The lens is a push-pull type – it only has the one grip for focussing and zooming – but it was surprisingly smooth. The lens is very heavy as it is all-metal. There is no plastic on this thing.

The lens can only be used in aperture priority or manual settings so I used the latter as it is my usual method. I took a variety of pictures and once I got back home I checked through them in Lightroom. The lens is pretty damn good. As with the garden test shots, the images were sharp and had good contrast for RAW files.

Below is a square crop of an image I took at 300mm in a dark wood at Packwood. The auto ISO went to 1400 and the other settings I used were 1/320 sec (to accommodate the focal length) and f/8.0. I did my usual method of black and white processing in Photoshop CC. I am very pleased with the result 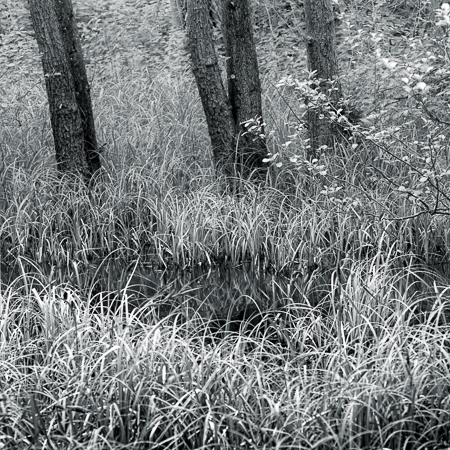 This is a lens I will definitely use again.

One thought on “Out and About”