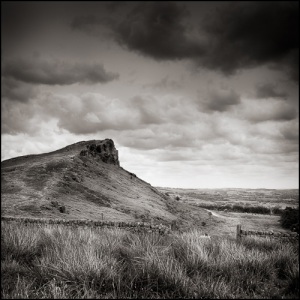 Taken at The Roaches in Staffordshire, part of the Peak District National Park. This image is of Hen Cloud. There are two thoughts as to why it is called this. Some say the shape of the grit stone outcrop from a certain angle looks like a roosting hen, the other (and more likely) is that its name in Anglo Saxon was Henge Clud, meaning ‘steep cliff’.
It was a blustery day when I visited the Roaches, with plenty of fast moving cloud, but this gave the opportunity together with a graduated neutral density filter, to get some dramatic skies over the outcrops.
Taken with an Olympus E-30.