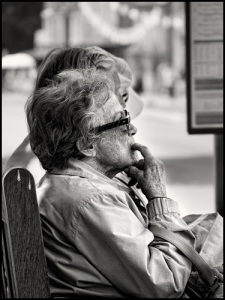 This image was taken in Broadway in the Cotswolds. The elderly lady had sat down on a bench next to a bus stop obviously waiting for her lift home. As I watched her, she seemed to be miles away, neither recognizing or conversing with her fellow ‘bench-sitters’ or taking an interest in the scene around her. She was in her own place for a few minutes, perhaps musing on times gone by, people she had known or maybe just thinking about what she was going to have for her tea.
Taken with an Olympus E-620