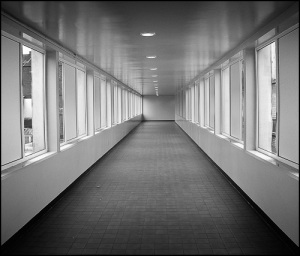 This is the pedestrian walkway in Leamington, from the car-park to The Parade. I was going to the bank and turned around as I reached the end of the corridor. I liked the soft light that came in through the windows and I happened to have my trusty old Nikon 4100 compact with me and so shot this picture. It’s simple, it’s uncluttered and has an air of mystery about it.