Continuing on from last week’s post, I have another three photographs taken at the National Trust property Calke Abbey in Derbyshire. They were all taken once again with the X-T1 camera and 18-55mm F/2.8-4 zoom lens.

This shot was obviously taken in the house itself in one of the rooms that the old lord had lived in whilst closing off most of the other parts of the house. There was something a little sad and faded about the feeling in this room. I wasn’t bothered about losing detail out of the window in this, I was more concerned in getting the tungsten light from the lamp and the daylight from the window to balance a little. 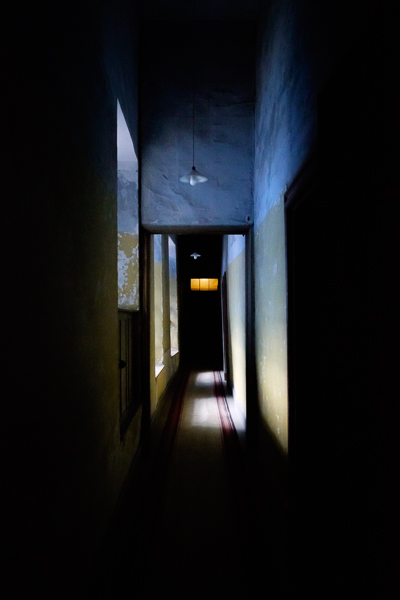 I have taken many shots from this viewpoint down an old corridor in the house. The paint peeling from the walls, the light coming in from the windows and the deep shadows all lend an eerie feel to the view. The title comes from the fanciful thought I had that to avoid whatever is laying in wait within the gloom, one would have to go down the corridor avoiding the shadows.

This photograph was taken in the courtyard in the centre of Calke Abbey, There were repairs to the walls being undertaken, and to protect the visitors, the scaffolding used by the workers was surrounded by plastic netting. Rather than using the horrible orange stuff, they had opted for a more pleasant, photogenic blue. I took the shot shooting up at the gap of sky between the four sides of the house and the light coming through the netting gave it a luminescent feel.