Following on from last week’s post where I showed three of my ICM (intentional camera movement) images, I thought this week I would post some multiple exposures created in camera. These are not several images put together in Photoshop etc. but where you have instructed your camera itself to overlay two or more images. Done with some thought and care, it’s possible to make some intriguing and lovely images in this way. Different marques of cameras will vary on how many they will overlay in one go, so check your camera manual.

Taking multiple images evolved in the days of film. To get the correct EV you would need to divide the exposure of the scene by the number of images you planned to overlay and then take each of the photographs, winding back the film after each one. It was a little hit and miss but in the right hands produced superb images.

The images below were all taken in this way.

This first image was taken at Baddesley Clinton, a national trust property. It shows a multiple exposure of the moat, bridge and main gate. It has an airy romantic feel to it, suiting the house itself. I shot the photograph from several positions around the building.

The second photograph is a multiple image of pampas grass. The double exposure has given an impression of movement and has given a more dynamic and interesting photograph.

This final image was taken at a fairground and features three images overlaid in camera. I walked around the fair-ride and shot several frames. I tried this several times, so don’t worry if it takes a few attempts to get the effect you want. 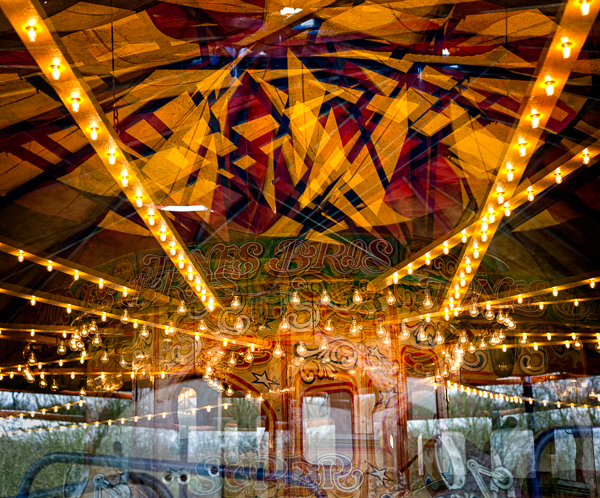